Method of improvising to Graphical Score 1 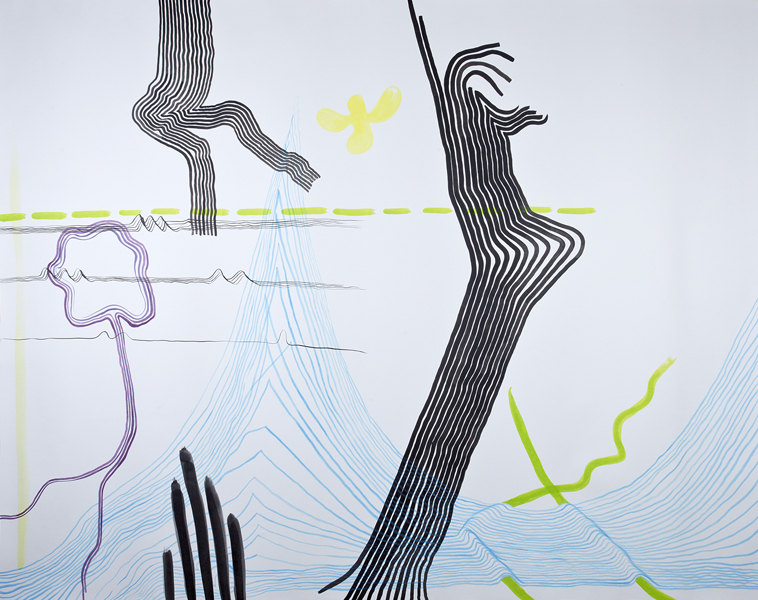 The group is a mixed ensemble including acoustic instruments, and electronics and in this performance included Holger Ballweg (Electronics), Sondre Bryntesen (Electric Guitar), Shelly Knotts (Electronics), Egidija Medeksaite (Electronics) and Matthew Warren (Accordion). We have been experimenting with improvisation practices together since 2013 and are interested in exploring methods of structuring group improvisations including the use of graphics scores and algorithms. The Affect Formations project interested the group particularly in the challenge it presented of structuring multiple performers' responses to the graphics, particularly in relation to diverse understanding of emotion in graphics and their translation into sound.

In approaching the performance of the piece we focussed mostly on how to structure the individual responses in a way that made musical sense and varied the texture and density of the performance. We decided not to spend too much time on group discussion of valid musical responses to the graphics themselves as we felt that emotional interpretation of graphics and sound are both cultural and subjective and that in a group performance multiple interpretations of the same score would be a valid approach. The performance directions that we received from Adinda were that we could either read the score from left-to-right or move from element to element of the score interpreting each element individually. We decided that the latter approach would work best for an ensemble performance.

With these limitations in mind we started the performance by playing for 1 minute with the whole group. Each player was allocated a different coloured element which was decided in advance. After the first minute we used a computer algorithm to decide the rest of the structure of the performance. The algorithm told each player which coloured element from the score to play, changing every 40-60 seconds at random, and when to drop out and play nothing (in order to vary the density of the performance). The order of the elements and the density of how many players played at a time was randomised so it would be different for every rehearsal and performance. The probability of each colour being allocated to a performer was scaled approximately by the space it takes up in the painting. This was displayed on a screen on stage visible to all the performers.

As a group we felt this interpretation left room for improvisation and different interpretations of the score in each performance and avoided us 'learning' the piece as we never know which colour combinations will come up and in which order. Also this meant we didn't have to do too much 'pre-arranging' of who would play what when. We each had an idea in advance of how we would interpret each element of the score, but the randomisation of colour allocation in the ensemble meant that our pre-formed ideas needed to be re-contextualised in each performance, depending on what other players are playing.

On the whole it was an interesting experiment in reconciling aspects of pre-prepared material with aspects of randomised structure and of trying to shape diverse responses to the same visual material in a way that is still relatable to the original score.